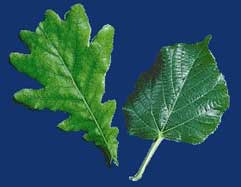 In ancient times, people were convinced that every tree had a soul. Trees were to them semi-divine beings, nymphs, which were turned into trees. This is evident from the work of Greek poet Ovid in his Metamorphoses. Often were only a nymph through a metamorphosis to escape persecution or accident.

A known transformation took place according to the legend of Daphne into a laurel tree that changed. She was not the first nymph who was seduced by Apollo, but the only one who has done against him.

Daphne was the daughter of Peneios, a river god. She wanted, like the goddess Artemis, rather free and unfettered wandering through the woods. Apollo fell in love and pursued her. Desperately she begged her father for help. That happened once. He turned his daughter into a laurel. But Apollo Daphne did not give up. He made her a tree and decorated head, lyre and quiver with its branches.

To the Greeks Daphne priestess of the earth mother.

Nice was the nymph by Hades, god of the underworld persecuted and turned into a silver poplar. She was the tree of death light in contrast to the black poplar, which symbolizes misfortune.

leaves of the Silver Poplar

The story describes a double Philyra metamorphosis. She was the daughter of Okeanos and lived on the island Euxinus Pontus. There she was honored. One day, when Cronos love with her (his cousin) practiced, he was surprised by his daughter, Hera. He changed into a white stallion and galloped away. Hera was the goddess of marriage and abhorred incest and adultery. The child that bore Philyra, was a monster, half man, half horse. With fear and shame she begged her father to her in a lime to change. Her wish was granted. The lime was in Greece a medicinal tree. Her flowers were used as medicine. Bark of the lime produced one paper. Torn into strips, served also to predict the bark. The son, on behalf of a centaur Chiron, had the gift of healing, for he knew the secrets of plants.

The chaste nymph Pitys, who threatened to by Pan raped, turned into a black pine (Pinus pinaster). According to another legend, she threw herself from a cliff desperately with her pan was half dead and changed into a black pine. Therefore flows since then in the autumn, when the cold fall winds blowing bora, a translucent resin from the pine cones, tears of Pitys.

Dionysos fell in love with the youngest daughter of the King Laconian Dion. The two jealous sisters reveals it to their father. Dionysus was so enraged that he turned two rocks. Karya, who died of grief, by him in a walnut tree has changed. For her it was a temple with columns of walnut in the form of women, called Caryatids.

She too was a victim of love. The Thracian princess fell in love with Akamas, son of Theseus, who participated in the Trojan War. When the fleet returned to Greece Achaërs, Phyllis stood on the shore waiting for her lover, who is due to problems with the ship arrived on time. Because they assumed that he was at sea in the war or had died, she died of grief. Hera, goddess of faithful love, changed her into an almond tree. Akamas then the next day arrived, he could just hug a tree, which flowers once appeared on the branches but no leaves.

flower of the almond tree 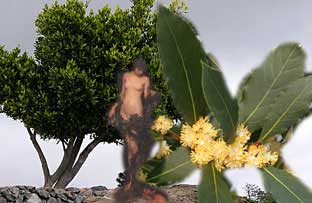 According to Ovid lived in ancient Greece, a mighty stag which was dedicated to the nymphs. Accidentally struck the animal with his spear Kyparissos which the deer died. The young man decided to die. Apollo loved the boy, tried to comfort him, but begged the gods to remain always mourn. He changed into a cypress. Since then planted an evergreen tree near graves. He is a symbol of inconsolable grief.

The story of Pyramus and Thisbe is the tragic result of a separated without hope. According to Ovid, this happened in Babylon. The two beautiful young people held in secret from each other. Their parents might not know, because they would never approve a commitment. Their houses were close together so the two through a crack in the wall could talk to each other. They decided to flee and agreed, together with a source under a mulberry tree, laden with white fruits, to meet. When Thisbe arrived, she saw to her horror, a lioness, whose mouth was smeared with blood. The young girl made her out of there with her veil dropped. The lioness grabbed her and tore him with bloodied teeth. When Pyramus arrived, he found the bloody veil and assumed that his lover had been devoured by the predator. In desperation he robbed d.m.v. his spear of life. The splashing blood colored the dark mulberries. When Thisbe from its hiding place emerged and saw what had happened, she cried: "You, tree, preserving the character of the murder and now only wear dark fruit on the grief of a double death, remember." After these words crossed they are the spear in her chest.

relief of Philemon and Baucis

Philemon and Baucis, oak and linden

Philemon and Baucis loved each other into old age. One day there were two people who were rejected by everyone, the door of their hut. The two old people invited them to come out and prepare a meal for them. They did not think it was the gods Jupiter and Mercury. This welcoming couple decided to reward. They climbed with them on a hill nearby. From the summit asked Philemon and Baucis dismayed that a more inhospitable homes of their neighbors had devoured their own cabin in a beautiful temple had changed. Mercury asked about their wishes. She said: "We want to be priests in the new temple and protect him. We never want the grave of another witness. " Their wish was granted. When their lives were in order, changed their bodies in trees. Philemon became an oak and Baucis a lime.