Trees for the welfare of people always played an important role. A city without trees is a dead city. Trees clothe a city street, provide oxygen, breathing in carbon dioxide, provide shade. The green of the leaves and the color and smell of the flowers have a positive impact on the mood of the city dwellers.

Under old trees and bushes used to be important events took place. It was gathered, straight talk and there were religious acts. People also found that some trees had special characteristics, making clear the mind and soul have been happier. There were trees that gave comfort and paranormal contacts supported. The sacred trees were not allowed to be felled. 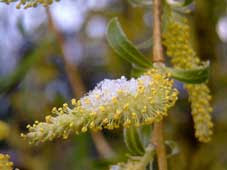 People discovered that different parts of a tree could make teas and drinks. Alcoholic beverages of ripe fruit that mind-expanding worked. Some of these drinks were like 'fire water', and drank only during religious rituals.

Animals that were sick eating special herbs and bark which they were better. When the people discovered this, they began to apply the same on its own. The knowledge of medicinal plants was down from generation to generation by women.

Still, in the so-called herbal plants used as natural medicines. It is believed that plants found in the rainforests would be against incurable diseases like AIDS and diabetes can be used. But yes, they have not yet discovered.

Wood amulets are still worn, not just because they like it, but because you feel protected by it feels to negative influences.

Of young willow baskets are woven for centuries.

But bark and wood had another function. In folk medicine the willow was known as a remedy for pain. In ancient herbal books of Hippocrates and the Greeks were Dioskurides willow preparations as a remedy for fever is described. Because willows in wet areas with mosquitoes grow, is also thought to have an agent against malaria. It helped!

The main medicinal substance was discovered in 1828. This material consists of bitter-tasting crystals, salicin. In slightly altered form as salicinezuur was a powerful antidote to pain, unfortunately, with strong side effects like nausea and stomach bleeding. Only in 1897 did Felix Hoffman, a way to make the drug more tolerable. He transformed it into azetylsalizylzuur, the ASS. That was aspirin, used to treat fever, pain and inflammation and even prevent a heart attack. Meanwhile, this substance synthetically.

Plant resources are dull pain more tolerable by the human body than synthetic. The willow is not obsolete. He is now grown in plantations for wood and bark of a natural agent to produce pain. bark salix caprea

This pain means plant suitable for all patients, who in chronic diseases, eg osteoarthritis, pain often means to swallow.

The simplest way to make Willow a drug for colds and fever, is brewing tea from willow bark. For the relief of pain is in the little tea-acting compound.

Botanical information on the willow

Prostate cancer is the most common male cancer. Which is an early stage to operate properly. Radiation therapy can help. Chemotherapy alone with his nasty side effects, is difficult. This may now change. At the Charité in Berlin is a new drug tested, so this treatment will have more effect with less side effects. The working substance is taxotere, derived from yew, the evergreen tree with soft, dark green needles. These needles are very toxic. This poison is now effectively used in medicine to destroy diseased cells. A cancer drug made from yew bark has long been on the market, but this new needle preparation would be superior in certain areas.

The first experiments show that the tumor taxotere clearly reduces pain. Nowadays one also finds that patients live longer thanks to this drug. The disease is slowed. Prostate cancer at an advanced stage by the yew drug is no cure. But the patients live longer with less pain. This is important for the quality of life.

Botanical information about the yew

Cinnamon is one of the oldest spices known to be of healing known and applied. He is in South and Southeast Asia, cultivated for the extraction of cinnamon bark. In Ayurvedic medicine, almost all parts of the tree used: leaves, bark, roots. The win leaves one oil. This oil warms the body and inhibit inflammation in intestinal infections and colds. From the bark and the roots will be herbal teas or salves. They are used for cramps, pain and strengthen the immune system. Sore throat can help when you chewing on a piece of cinnamon bark. The harmful bacteria in the mouth are hereby slain.

Cinnamon oil is also used for suppositories with inflammation in the vagina.

The harvest of cinnamon is a spiritual action, because it is an Ayurvedic doctor for medicinal plant that is with respect to approach. The need is three times in the hands clockwise around the tree branches before they run tube too short. The drug would work even better when a prayer.

In Western medicine is now the healing power of cinnamon scientifically tested, especially with regard to diabetes. The active ingredient in cinnamon MHCP would drop in blood sugar levels and thereby ensure the uptake of glucose into the cells increase, which looks at the effect of insulin.

For botanical information about the cinnamon tree
Posted by Unknown at 8:19 PM