Plums are among the stone fruits. Plum Trees questions generally low maintenance and are relatively easy to grow and prune. Usually, the plum trees with a more limited pruning. By pruning plum trees will give you a better tree, less fruit and fewer branches that break. The fruit can grow better and tastier flavors by pruning. Some plum varieties can be pruned as little better because they can die from severe pruning. Pruning in winter is generally not recommended for stone fruit. Prune in summer a dry day so the wounds can quickly dry up.


Plants of sweet cherries (Prunus avium)Plums are among the stone fruits. Plum Trees questions generally low maintenance and are relatively easy to grow and prune. Usually, the plum trees with a more limited pruning. By pruning plum trees will give you a better tree, less fruit and fewer branches that break. The fruit can grow better and tastier flavors by pruning. Some plum varieties can be pruned as little better because they can die from severe pruning. Pruning in winter is generally not recommended for stone fruit. Prune in summer a dry day so the wounds can quickly dry up.Naming plum - Prunus domestica:- The ordinary European plum has the scientific name: Prunus domesticaThe plums are like cherries, cherry, peach, nectarine and apricot to the group of stone fruit (Prunus species).

Meaning of scientific name: Prunus domestica insititia- Prunus: From prune (Gr.), cherries and plums, plum tree. Several stone fruits.- Domestica: From domus (L = house, home, native). Domesticated or cultivated plant. Is common in culture.- Insititia: From to (= L. in, on) and situs (L = places) used for grafting, rootstock. Lower part of a grafted plum tree that bears roots.- Cerasifera: From cerasus (L. = cherry) and ferre (= bear), bearing cherry.Read more about the origin and explanation of Greek and Latin plant names: "ABC of Latin plant. The use of botanical names"


Pruning plum trees may only occur between mid-April and mid-September. Often after picking plums in August the necessary pruning. Prune plum trees and stone fruit Never in wintertime!
Choose a warm, dry days for the pruning so that the pruning wounds quickly dry up.

Bend of branches to prune fruit quicker to have:

The fruiting wood in the trunk, branches above that 4-5 frame should have a horizontal position. 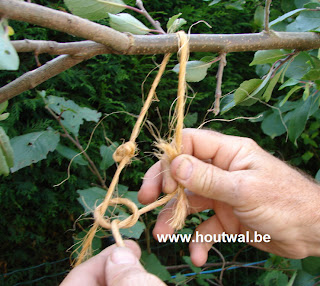 Photo: When should bend the rope lace up. Have a large loop around the branch holds.
Prune trees prune many or few?


A plum tree that bears little or no fruit, does not bear fruit by pruning! Even the opposite! Pruning promotes vegetative growth and thus get (slightly) less fruit.

Pruning up to 1 / 3 of the branches. Try to pruning neglected trees over three years to distribute.

Plum trees should not be pruned much! Compared with apples and pears to plums with a lot less further pruning.

Prune if possible, or even as little as possible. Some plum varieties such as 'Reine Victoria' (= 'Queen Victoria') tolerate pruning well and not die easily.

Cut a large branch off better than many small branches to prune away.

Growing Strong rugtwijgen can break away as early as possible. That might happen if they are still herbaceous, the first year of growth.

Growing Strong zijtwijgen that aside from the leaders, it is best to grow horizontally bend. The horizontal bend reduces the strong growth and more flowers buds are produced.

Growing strong twigs to the trunk to grow and grow straight up it is best to remove. Let the takkraag (about 2-5 cm), so that a new shoot below which may arise naturally grows horizontally.

Extensions of frame branches bend slightly so it is best to grow almost horizontally. (65-85 ° angle from the central leader t.o.v. / strain). In young plum trees, the position 65 °.

Strong branches that are at the bottom of the stem of the rootstock and game storage is best to completely remove. Do this regularly so that the pruning wounds as small as possible.


Fruit trees pruning. How to remove the prunes pruning?

Storage of the wild rootstock

Too thick branches at the top of the trunk or central leader.

Branches that bend at the outbreak can best be pruned away. Mainly steeply growing branches break off easily. Do not include a small takstomp of 3-15cm stand.

Vertical growing rugtwijgen remove that too much light.

Branches growing straight up the trunk. This too sharp implanted top of the tree branches, seem half cup or stem to form.

Too long and hanging fruit wood

Too low hanging branches on the tree

A branch that is affected by the fungal disease galena. Perhaps it is good for the life of your tree a little stretch.

Trees that were fruiting bodies (mushrooms) show the galena fungus it is best to completely clean! They are a major source of infection for other trees! Let the prunings are not in the area, but destroy it!

Also remove dried or moldy fruit, they are an important source of infection for the next harvest. 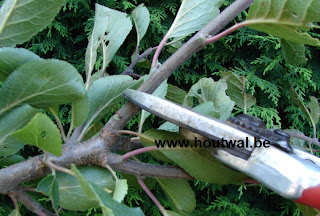 Use sharp pruning material so pruning wounds are so small and clean as possible.

Pruning is not too close to the main branch. The takkraag should be preserved wherever possible, for proper wound healing.

Small pruning wounds should not be smeared

Large (saw) to be recommended for wounds to rub with a wound healing agent for infection of the galena prevent fungus.

Disinfect your pruning equipment, when you suspect a plum tree (loodglanschimmel) have been cut.

Pear trees are pollinated by insects. Cross-pollination is usually necessary. The large, white flowers appear in clusters on short perennial shoots.
Flowering time: the first half of April. By the early flowering time is some years of spring frost damage, with flowers partially or fully frozen. See also article on pollination pear varieties.

Pear trees are suitable for large and small gardens. Some species and varieties are also suitable for the ornamental garden. Especially the apple pear or Asian pear sand is very beautiful!

See "Storage of apples and pears"
Interesting pear varieties because of their regular production and / or because of their low disease susceptibility.
Posted by Unknown at 8:43 AM 1 comment:

Fruit trees in the garden: mirabelles are self-pollinating and require little maintenance!

Mirabelles are easy and healthy trees in the orchard. By the numerous white flowers in April-May this stone fruit suitable for the ornamental garden. Mirabelle are self-pollinating and do not require cross pollination. They grow well on poor soils, provided they are not too wet. Fruit thinning may, but is usually not necessary. Mirabelle are usually ripe in August, but there are earlier and later ripening mutants or hybrids. Mirabelvruchten are smaller, rounder and sweeter than regular plums. The most recommended are mirabelrassen "Bella Mira", "Nancy-Mirabel ',' Mirakose 'and' Mira Grande.

Taxonomic classification of the plum or kroosjespruimen:

Root suckers can be planted separately, as mirabelle (and wichters) are also on their own roots to grow.

Most are yellow mirabelle, but there are also some red and blue types.

They are small, round, sweet fruit. Mirabelle have remarkably dry and sweet flesh. This makes them particularly suitable for processing (stewing, jam / marmalade, canning and freezing). For fresh consumption mirabelle useful. 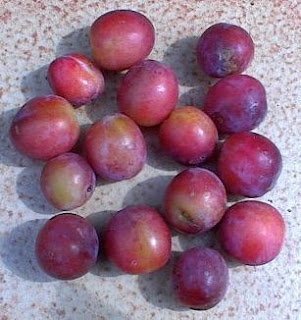 Flowering and pollination in mirabelles: 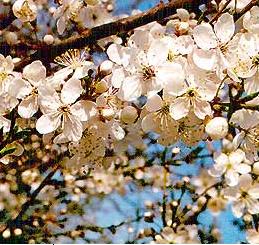 Mirabelles make fewer demands on the ground than regular plums. They also grow on poor soils, provided they are not too wet.


Harvest and use of mirabelles:

The fruit production is usually very large, so that branches can break.
The inner fruit quality is usually less than the normal plum.
Because the fruits are usually shed caused numerous minor injuries, so storage and transport difficult. For fresh fruit consumption can not usually buy.
Mirabelle is particularly suitable for freezing, canning (canning) and for processing into jam or marmalade.